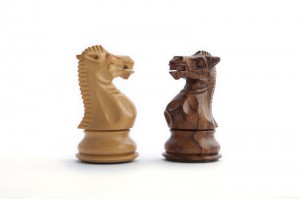 Duality versus non-duality is the key distinction being made in A Course in Miracles (ACIM). The metaphysical and psychotherapy principles are based in helping you understand how to choose non-duality because that is the choice needing to be made. Until you grasp this type of perception and correct choosing, it can seem frustrating and impossible to achieve; however, the process is learning the principles and then applying them. You also have to remember that the part of you feeling frustrated is the ego, judgments of duality, which the principle of non-duality withdraws belief from when put into practice.

Frustration is an emotion the ego uses to keep you stuck in duality because if you start choosing Love (non-duality), that’s death to it. As with all emotions, frustration is a judgment being used to defend the ego’s idea of separation and protect its position. Ultimately, it is the choice for attack on yourself because you are not at peace which is your true nature; and, you only attack from having already chosen to feel guilty.

Choosing internal dialogue composed of duality defenses is the basis of the ego’s thought system where it asks you to choose between two things (guilt or fear) in your mind. A very common mis-perception is about what you are choosing between and in this article we’re going to discuss the choice between duality and non-duality from the perspective of ACIM.

Duality is Fear and Guilt:

Duality is the ego’s false kingdom ruled by fear as the ego’s substitute for Love, and guilt as the reason you are fearful. The dualistic system asks you to make choices, which seem like opposites, but are really between the two roles of victim and victimizer within the same system.

By definition dualism is: (a) the division of something conceptually into two opposed or contrasting aspects; and, (b) a system of thought as a reality in terms of two independent principles. Victim and victimizer are the aspects in part (a); and fear and guilt are the reality principles in part (b). Principles of fear and guilt are the fundamental truths of the ego in dualism.

Fear as a substitute for Love is ego right mind. You have to replace the Love of God. Guilt is the ego wrong mind. You must feel guilty and afraid of punishment for what you did in separating. One pretends to love and one openly hurts.

The one principle (fundamental truth) of non-dualism is Love. When you put the word “non” in front of dualism, it means “not getting involved with.” The definition of non-dualism would then be to not get involved with opposed or contrasting principles; and, since the system of thought contains only one principle, Love, there’s nothing to choose between. Therefore, Love cannot recognize duality.

Love, as ACIM refers to it, is pure non-dualism and it cannot fathom the choice of hurting yourself (victim) or hurt another (victimizer), because the “you” being referred to in Love is only Oneness and the Sameness and attacking itself is inconceivable. That would be the definition of insanity.

The Course says you have this third choice which is the choice for Love, or non-duality. Instead of denying this One Truth, deny the dualistic miscreations of fear and guilt. This One Choice ends conflict in all situations.

Perception is what changes internal Teachers between dualism and non-dualism. Using the decision maker to choose is how you shift perception. With the Holy Spirit of non-dualism as perception, you correct the mind (forgiveness) gently until you are fully back in True Perception.

When the choice was made to deny non-dualism, the One Truth (Love), it split the mind. Dualistic judgments are miscreations from the denial and are the reverse of Creation. The mind has a Source which uses perception to determine how that Source is applied.

Perception is: “A state of being or process of becoming aware of something; and way of regarding, understanding or interpreting something.” From this definition, you can see ACIM’S Law of Cause and Effect: According to the mind you use as cause (perception), you will see (perceive) the corresponding effect.

Let’s use “atonement” or “at-one-ment” as our example for perception:

If you are considering “at-one-ment” to mean that you “have to return” to Oneness, you are perceiving with the ego wrong mind that separation is real. You are also perceiving with the ego right mind that you are a victim of God who allowed you to separate. In other words, God being who He is, you are perceiving that not only it is possible to separate but He allowed it and victimized you for it. That’s the first three Laws of Chaos in a heartbeat and basic dualism of choice between roles of victim and victimizer, and between fear and guilt.

If you are considering and accepting Atonement as the Love solution to restore the mind, you are willing to perceive with the Holy Spirit Right Mind that only Love is needed to correct the mind. After all, only Love was denied in the “tiny mad idea.” This perception is the key to the kingdom of the doorway to Love (non-dualism).

The question is how to know when you are choosing within duality versus non-duality. It can be confusing and frustrating which is what the ego wants so you don’t choose out of its thought system. However, that is the choice you will have to make if you want the madness and chaos to end.

There are some key discriminating characteristics to consider about non-duality: (1) Love is all-inclusive of everyone and everything as being the same as itself; (2) Love cannot conceive of condemnation and attack; and, (3) Love shares, or gives, only more of itself which is Love. Quite simply, you are choosing to perceive with Love that there is no Truth different from Love.

I just assume everything is ego unless I feel total all-inclusive Love. Duality is duality. I wouldn’t be here if I didn’t have to withdraw belief in everything.

Use your ability to make decisions (the decision maker) to withdraw belief in dualistic miscreations. Go by how things look, sound and feel; and if you want to be free of the ego, consider it all as being ego. Here’s the deal from the Course: The ego made the body for the mind to have something to perceive dualism (separateness) through. Non-dualism uses the body to join with another in Love. The decision maker is the movement to change perception as only decision (choice) denied Love and made different perceptions when the mind split.

With a little willingness, you learn the principles and then get started applying them. Yes, you will make mistakes but so what. We all have. The more you apply non-dualistic perception the more you learn and the greater your willingness becomes until you do it all the time and over everything.

Resource: Delilah Jaemes at http://spiritualguidancecoach.com. Spiritual guidance coaching and counseling using the metaphysical and psychotherapy principles of A Course in Miracles. My goal is to point you in the right direction for a change of internal Teacher. Delilah is available via email, Skype and phone; and she conducts spiritual retreats in both Hawaii and Italy.